In our previous post, we mentioned about our collaboration with York, UK based Abhay Adhikari to organize the Social Media Baithak, an informal gathering of people from two different fields to share knowledge and collaborate for social good. The two different fields being, Social Media and non profit organisations, in the spirit of Indian tradition we call the participants SM Guru and SM Shishya respectively.

On Saturday, 11th Sep 2010 in the first Social Media Baithak held in Delhi, the city techies and the social activists came together to discuss various ways of using social and online communications technologies for the benefit of non-profit sector and informal grass root work. The venue was not a seminar hall but a cafe, the subject matter experts didn’t come prepare with a ‘talk’, the NGO participants didn’t come to ‘listen’ to the experts but to converse with them, face to face on anything related to Social Media. The initiative was one of its kind and it received an equally great response from the participants, proving the fact that it was much needed and long awaited. 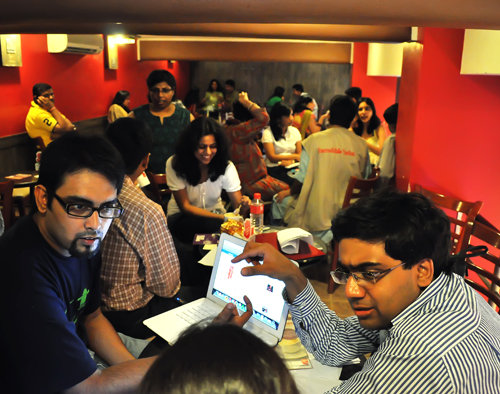 Delhi or India for that matter is not new to informal technology related events. There are regularly held, successful and constructive events and initiatives like the Barcamp, Blogcamp, Social Media Club, Headstart, Start Up Saturday, Open Coffee Club and some more. However most of these informal conferences or meet-ups are attended by people from similar background, most of them being techies or budding entrepreneurs in the field of technology.

On the other hand there are plenty of informal collectives and groups in Delhi consisting of NGOs and activists that meet and communicate regularly to share common issues, learning, campaigns and causes. What was missing was inter community conversations, something that Social Media Baithak was able to inspire and host.

Thus on Saturday, in the crammed upper floor of Janpath Cafe Coffee Day a team of 14 Shishyas, 9 Gurus, one amazing photographer and some friends attended the first ever Social Media Baithak. The atmosphere was full of energy and everybody was equally excited and eager to share their learning and experiences.

There were 20 open seats for SM Shishyas which were announced through the Eventbrite page. 10 individual invitations were sent to city based techies who are reasonably well versed with Social Media technologies to be a part of the event in the role of a SM Guru, making it a ratio of 1:2 face to face conversations. Predictably, when the event was announced, organizers received more calls from those seeking knowledge on Social Media rather than those willing to share knowledge. Talking about how fast the seats were filled, co-organizer Sanjukta said, “within 3-4 days of opening the SM Shishya tickets via Eventbrite page the seats were all sold out. However, we continued getting calls from more and more NGOs and independent activists who wanted to join the initiative. After a round of profile and background check we had a list of 20 Shishyas.”

The event started with a round of introduction from all present. The team was then broken in small groups of 1 SM Guru and 2-3 SM Shishyas. The participants themselves arranged the CCD tables to sit comfortably in close circles for the next 2 hours during which they engaged in serious and constructive conversation on everything related to Social Media for non profit. The event was concluded with the team regrouping in one large circle and sharing their experiences and feedback.

Abhay and Sanjukta both shared their initial thoughts behind the initiative and why and how they happen to partner with each other. Abhay said, “One of the reasons I decided to be part of this was because I wanted to give my peers and friends back in York an exposure to the amazing activities done by both Indian social media and NGO community.” Meeting them for the first time, Abhay was particularly delighted at the range of SM Gurus who volunteered for the event. 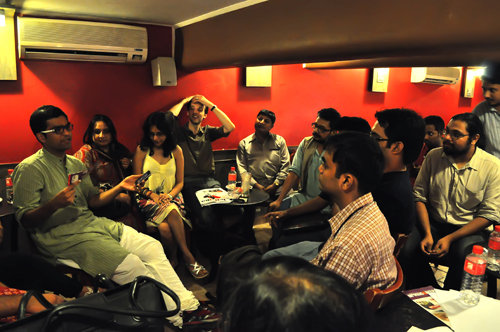 Sanjukta mentioned her intentions to take this initiative forward by making it a regular event and also spread across different cities. She said there are many plans but one needs to look at the sustainability factors like funding for a more suitable venue, light snacks, remuneration for a dedicated team required to ensure a smooth coordination etc. At this point almost every participant pitched in with their suggestions on how the initiative can be made sustainable. While some offered help in getting funds, other offered their office premises as venue. “I think this was the best thing about the initiative, everybody who came had a sense of ownership of the initiative, it was not just an event organized by a grand body which people attend and move on. It was something people wanted to contribute to. When I thought of organizing it I knew I don’t have all the answers, but I just wanted to make a start and hoped suggestions and help will come along,” said Sanjukta in response to all the suggestions coming.

Sanjukta talking to TED Fellow Rahaul Nainwal who is the co-founder of I volunteer. On the right is SM Guru Abhishek Bax. Photo Credit: Naina Redhu

On being asked whether the Baithak was useful, Ichwant Bana said she got more than what she expected from the Baithak. While the primary objective of taking social media to non profits were met in ways more than we all expected, the event also turned out to be a great networking place for people who are eager to contribute towards a social cause. Even as we write this report there are conversations happening on Facebook between organisations, activists and techies who met each other for the first time at the event. Collaborations and team initiatives are perhaps the next steps.

We will be closely watching and reporting back on the collaborations and initiatives born out of this platform, them being some of the objectives behind the ‘Baithak.’ In particular, we are interested in collaborations between a city techie and an NGO because the Baithak was particularly significant so far in bringing these two sections of people together.

It will be a continuous effort of Samyukta Media to conduct more such social media outreach events and workshops. There are also plans of a more structured and prolonged partnership with Abhay Adkhikari’s Dhyaan Design.

Abhay Adhikari wrote a blog post on his experience as an organizer and a SM Guru. 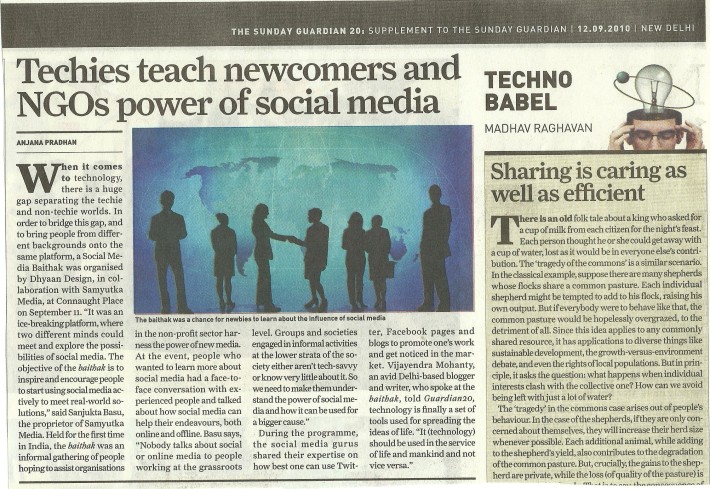 Press coverage by The Sunday Guardian